In 1418, Portuguese explorers under the patronage of Prince Henry the Navigator discovered the Madeira Islands approximately 450 miles off the west coast of modern-day Morocco. Soon, after, the Portuguese commenced the colonization of the uninhabited islands of Madeira and Porto Santo. The earliest settlers included mariners, merchants, missionaries, craftsmen, artisans, freemen, and convicts from Portugal. Slaves, captured in Morocco, Mauritania (south of Morocco), the Canary Islands, and the Guinea coast of West Africa worked the lands and crops of the coastal estates of the Madeiran nobility. Thus, the folk art, music, and dance of Madeira reflect this ethnic and socioeconomic fusion. The repertoire of the Grupo Folclorico Madeirense also documents and demonstrates the social and economic history of the islands from sugar cane plantation slavery to wine production. 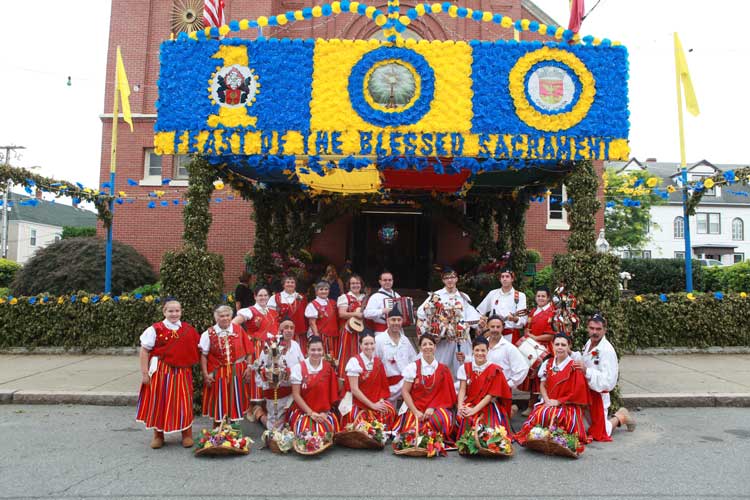 The Grupo Folclorico Madeirense do Clube Santissimo Sagrado Sacramento was founded in 1979 by Ms. Dulce Reis - a native of Madeira who immigrated to the United States - in New Bedford, Massachusetts, where there resides one of the largest communities of Madeirans rooted in the United States, in order to promote and preserve the folklore of Madeira in this country. In 1979, her uncle was president of the great feast of the Blessed Sacrament, which takes place annually on the first weekend of youth folkloric group, was also active in recruiting members as her two daughters also became actively engaged in the group.

Unlike many other Portuguese folkloric groups in the region, which display folklore from Portugal's many regions, the Grupo Folclorico Madeirense is committed exclusively to performing Madeiran folklore. The costs, therefore, of maintaining instruments native to Madeira and acquiring matching costumes for all female and male members are enormous. As a result, in 1984-85, the group succeeded in obtaining monetary subsidies from the Cultural Arts Foundation and the New England Council for the Arts to defray the cost of acquiring new costumes and instruments. In return, the group committed itself to providing free performances for charities, cultural centers, and other civic/social institutions in the area. To that end, throughout its existence the group has held free performances and exhibits several times each year as part of its community outreach programs. We perform in nursing homes, schools, and colleges. 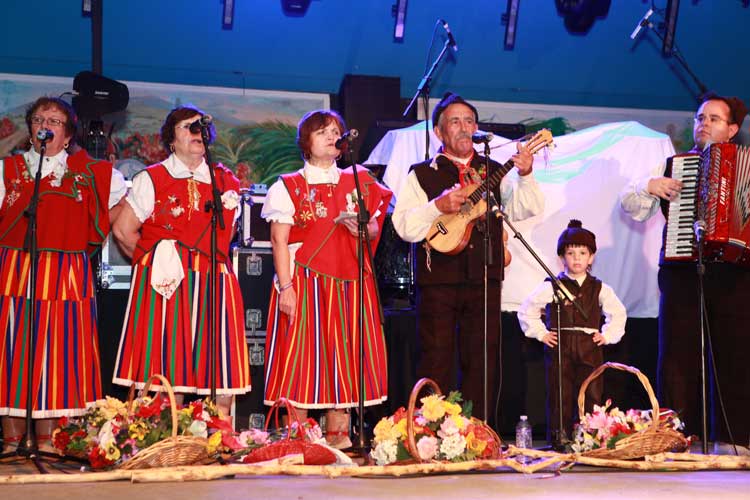 In February 1995, the Portuguese Times (of the New Bedford/Fall River area) wrote of the group: "This folkloric group, along with its many years of existence has been and still remains one of the most solicited groups to exhibit the folklore of Madeira in various parts of the country and the world," and has been described in other newspapers as "one of the most popular folkloric groups in New England." In July 1987, the group traveled to Madeira by invitation of the Board of Directors for Cultural Affairs of the Regional Government of Madeira. The trip to Madeira lasted about two weeks and included exhibitions in various communities throughout the island including the Municipal Theater of Funchal, Camacha, Sao Vicente, Porto Moniz, Ponta do Sol, Ribeira Brava, Santa Cruz, and Machico. In March 1988, the group traveled to Norfolk, Virginia where it performed in the "Festival Portugal." In January 1993, the group participated in the Feast of Santo Amaro, the patron-saint of Madeira's fishermen, in San Diego, California. In 1994, the group performed at a festival entitled "A Taste of Portugal" at the Taj-Mahal Casino in Atlantic City in which other folkloric groups August at the Madeira Field in New Bedford. As a result, she decided to organize some of her college friends at Southeastern Massachusetts University (present-day University of Massachusetts-Dartmouth) and form a folkloric group to perform traditional Madeiran dances at the feast. Approximately thirty-five volunteers joined the group. Twenty-two dancers were accompanied by accordions, a "rajao", a ukulele, guitars, a mandolin, violin, drum, castanets, an iron triangle, vocalists, and a "brinquinho" - an instrument featuring tiers of tiny wooden dolls adorned in the native Madeiran costume with castanets affixed to their backs and cymbals (usually made with metal bottle caps). Although many of the original dancers and musicians were immigrants from Madeira, many others were from the Azores, continental Portugal, Brazil, and even Angola. When asked why they perform Madeiran folklore, they respond that it is out of love for Portuguese folklore and culture and also in order to maintain the tradition and spirit of the peoples who inhabit the Portuguese islands of the Atlantic.

One of the group's little known secrets is that for the first year and a half of the group's existence, the instrumental component was taped on a "playback" system for performances. After that period the musicians emerged with a greater knowledge of Madeiran folkloric music and they became very important in giving originality and authenticity to the songs and dances. The group's first trainers were Ms. Dulce Reis and Mr. Luis Bettencourt - an immigrant of Azorean decent. Although the group's first live performance was at the 1979 Feast of the Blessed Sacrament, the group actually performed first on the television program "Portuguese Around Us" with Sylvester Sylvia. Three of the group's earliest and most active members - to whom we today owe a great debt of gratitude - were Ms. Christine Torres, Mrs. Maria Quintal, and her husband Mr. Jose Quintal who were central in the collection and manufacturing of the traditional garments and the organization of the group's first members. Ms. Torres, who was formerly tied to a Madeiran from New Jersey, New York, and Pennsylvania participated. The group also participated in the Second Annual Portuguese Arts Festival at Roger Williams College in Bristol, Rhode Island that featured five other folkloric groups from Massachusetts, Rhode Island, New Jersey, and Connecticut. During the exhibition, the group was awarded first place by a panel of judges and rewarded with a free trip to Portugal. More recently, the group traveled in August 2002 to Sao Miguel, Azores and performed during the annual feast of the town of Povoação. Today, we are the only Portuguese folkloric group on the east coast of the United States that has managed to transcend the ethnic frontiers of the Luso community by regularly performing in cultural festivals of major importance. The group continues to perform regularly in Provincetown, Massachusetts, Martha's Vineyard, New Jersey, and other parts of New England.
Some of the group's most memorable moments include an exhibition of the group at New Bedford Vocational High School during the visit of Portugal's former President, Mario Soares. Also, the group performed at a reception in East Providence, Rhode Island, in March 1993 in the presence of Amalia Rodrigues - Portugal's greatest fado singer.

In 1981, just two years after its establishment, with the unconditional support of the group's members, the group organized one of its most daring enterprises - the realization of its first Folkloric Festival, which soon became an annual event that featured performances from the great majority of folkloric groups in New England. Aside from raising funds for the group, the objective of the Festival, above all, was to showcase and promote the folklore of Portugal's various regions and also to stimulate social relations between the many Portuguese folkloric groups in existence in New England. Aside form an interruption in 1989, the annual festival continued until 1993 not to be revived until this year with the group celebration of its 25th Anniversary and organizing a two-day folkloric festival on the weekend of September 18 and 19, 2004.